Monday 1: April Fools Day. We saw some good ones.

Saturday 3: Julie was training a new person today in Seattle. She lives in Lynnwood, and between them, they decided that the Lynnwood location would be better for her, and Julie would prefer the nicer people to work with at the hotel in Seattle. So after a conversation with her coordinator, Julie may end up working permanently (or as permanent as anything gets in our lives) in the Seattle location. Longer travel time, but she’s OK with that.

Monday 5: We arrived home today to find this little guy staring straight at us. Even better, he stayed there long enough for us to take some pictures. This was the best one.

We bought a table to go with the 4 chairs that we acquired when someone was moving out. The chairs are really bar stools, so we will have to come up with a mechanism to left the table about 8 inches, so that we don’t crack our knees when we get to set around it.

Tuesday 6: We did a LOT of walking around shopping today. Too much for a recovering knee. That swollen bit is saying it was too much, and now I have to go back a few weeks and start again, resting, icing, elevating.

This is the icing process – a barrier to prevent the skin from getting burned, then the cold pack straight from the freezer, then a towel to hold it all together.

Holly helping me to keep the elevation stack in place. 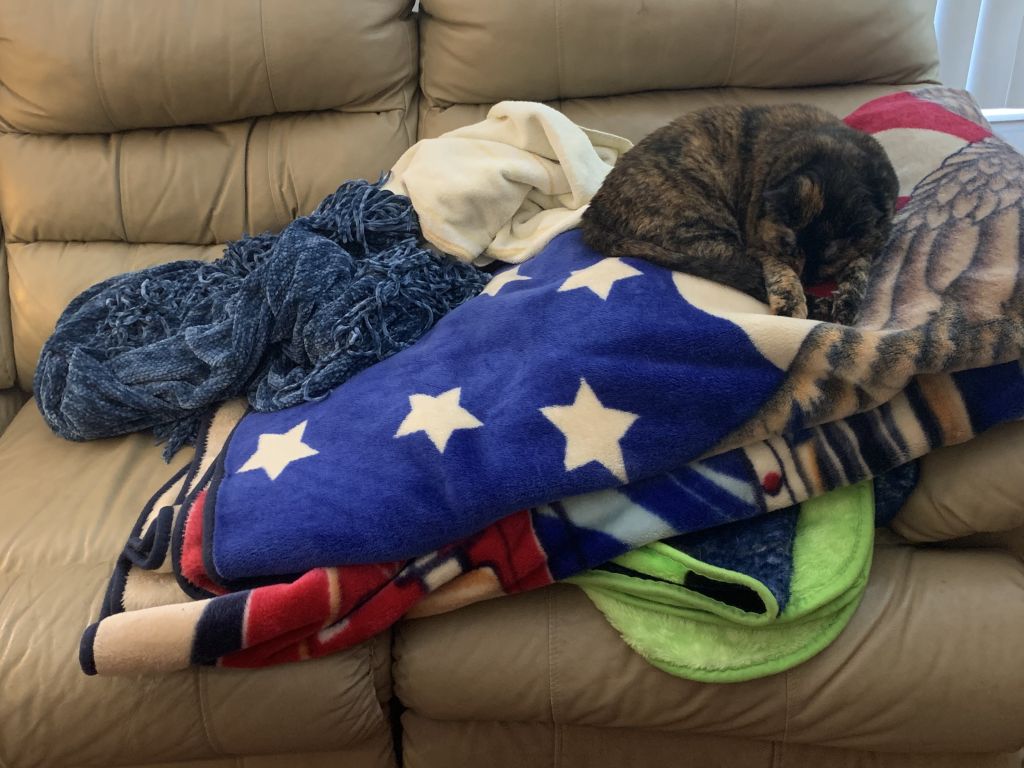 Sunday 11: We invested in a cover for both table and chairs. Later, with the wind blowing, I had to tighten the cord at the bottom to prevent it from disappearing into someone else’s patio.

This is the new and improved version of the icing process – cover the leg and slap the cold pack straight on. This method can also be used to treat other parts of the legs when they start to ache. Restless Legs Syndrome is a real bugger when there are other factors in play.

Monday 12: It looks a bit better now, starting to show some curves again, although the RLS is seriously getting in the way. My left leg can start aching as early as mid morning, and continues off and on until bed time, by which time I’m at screaming point.

Lord of all he surveys.

Tuesday 13: I took Julie to the VA Hospital for a blood draw today. Given that I’m trying not to walk long distances, she went in alone, with detailed instructions on how to get to the lab. Meanwhile, I spent the time on the top level of the parking garage.

I couldn’t pass up this awesome view of the Olympics. Click on the picture for a bigger version.

And around to the right from there, the city skyline..

Thursday 15: As the days warm up here, both Buddy and Holly are spending time out in the patio. This cheeky squirrel sat there for quite a long time, just to piss Buddy off (although he didn’t seem to care).

Thursday 22: Another week gone. My medical leave payments finish at the end of the month. I had hoped that I would be fit to return to work by then, but that doesn’t look very likely. With all the upset and offset going on at the bottom of my back, it had decided to be yet another source of pain. For a while, just getting out of bed generated a 9 out of 10 shooting pain down my left leg, and walking wasn’t much better. I’m still having trouble just walking.

During my PT session today, Buddy decided that I needed some supervision.

Friday 23: Now that the weather has cheered up a bit, Holly is now allowed outside in the patio.

Monday 26: During a highly productive in-person visit with our PCP (Primary Care Provider), we discussed my lower back issues. He showed us the X-rays that had been taken recently and pointed out the spurs on several if the vertebrae, as well as the degeneration in several of them, and the gap between L4 and L5. Along the way, he mentioned the dreaded words “spinal fusion”. We will see what the spine specialist says.

Julie also mentioned that during a previous visit to the clinic, the nurse had marked a spot on my back, The doctor took a picture of it for us. Don’t yet know what it is.

Tuesday 27: Via the BoneSmart forum, I have started using the services of. OneStep, who offer, among other services, a phone app that analyses my walking gait. The tricky part is that I need to either put the phone in a pocket or attach it to my leg. The pocket part is tricky with the shorts I wear, so I figured out an alternative. Given that I often wear a brace on the knee, I can simply lift it a bit higher and jam the phone in there. For the picture, I have lifted the shorts out of the way, so normally it’s almost invisible.

I also took some pictures to send to my PT person, who just happens to be in Israel.

Thursday 29: Holly continues to work her way into weird places.

The view inside our apartment.